CHURCHILL DOWNS, KY—Ater making quick work of COVID thanks to wonder drug Ivermectin, Joe Rogan shocked the sporting world when he ran onto the track of the Kentucky Derby and outpaced every horse to win the competition by half a length.

"I don't know what came over me," snorted Rogan as he took a victory lap. "First I gave COVID the hind-kick, then I just got this overwhelming urge to head for the fields of Kentucky. Next thing I know I see my fellows out there lining up in the gates and I just had to get in the action, get in the slop."

The preamble to the race had been inauspicious, with wet conditions covering the grounds in mud. Just as the race was about to begin, spectators began yelling that someone had jumped the fence - but it was too late to stop the starter from opening the gates. As the cameras turned to what everyone assumed would be a run-of-the mill streaker, an audible gasp came over the crowd as it turned out to be Joe Rogan.

Following the race, Rogan graciously posed for a few pictures although he kept shuffling from side to side and shaking his head. "I feel like I need my hair brushed, I think I'm going to head on - nay, I think I'll stay a little longer, just got a craving for oatmeal and peanut butter!"

Sources report that Rogan has committed to going for the Triple Crown, although he has demanded nice new shoes before the Preakness. Sadly, Rogan was stripped of his Derby championship after testing positive for DMT, THC, LSD, PCP, but notably was negative for worms. 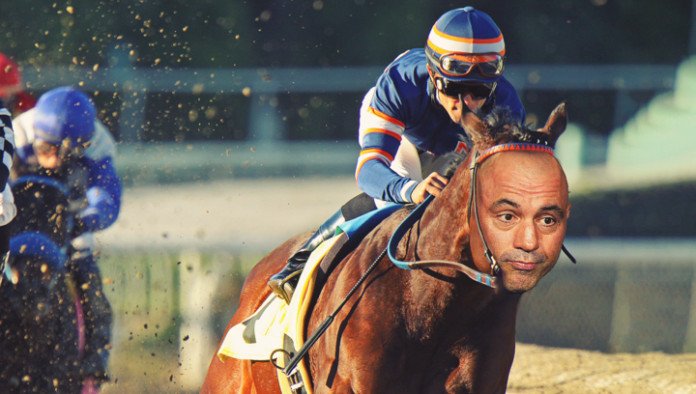