September 21, 2021
Dr. Fauci Uninvited From Board Game Night As He Keeps Changing The Rules As He Goes

WASHINGTON, D.C.—Dr. Fauci was uninvited from his typical weekly board game night after his gaming buddies simply couldn't stand it anymore as he kept making up the rules every time he played a game. According to other members of the hardcore tabletop game group, Fauci changed the rules in the middle over and over again and kept claiming he was just "following the rulebook."

This first came up when Fauci and his pals were playing a game of Pandemic. Other players were doing a decent job keeping the disease cubes in check and working toward a cure when Fauci's turn rolled around. He immediately started throwing his cards up in the air, picked up a bunch of yellow cubes from Lagos, and began chewing on them.

"What are you doing?!" asked Clyde, a regular at Fauci's local game shop.

"Yeah, uh... chewing on the cubes eradicates them. It's science. Right in the rulebook."

"I mean... technically, I guess it does eradicate them," Clyde said, shrugging.

Fauci then pulled out a Space Marine figure from his Warhammer collection and began blasting all the cubes away. "PEW PEW PEW! BLEH I'M DEAD!" he cried as he had the Marine use his Bolter to blast everything on the board. "There. We won! Great job guys. I should get an award. What game is next?"

The doctor then made up a rule that all astronauts had to be distanced by at least six tiles in Galaxy Trucker and that the Rebels had to surrender to the Empire by galactic law in Star Wars: Rebellion. The last straw was when he tried to forcibly shut down all the small hotel chains in Acquire and only let the giant monopolies win.

"Those guys suck," Fauci said through tears after flipping the board, taking his stack of games, and leaving. "I didn't want to play with them anyway." 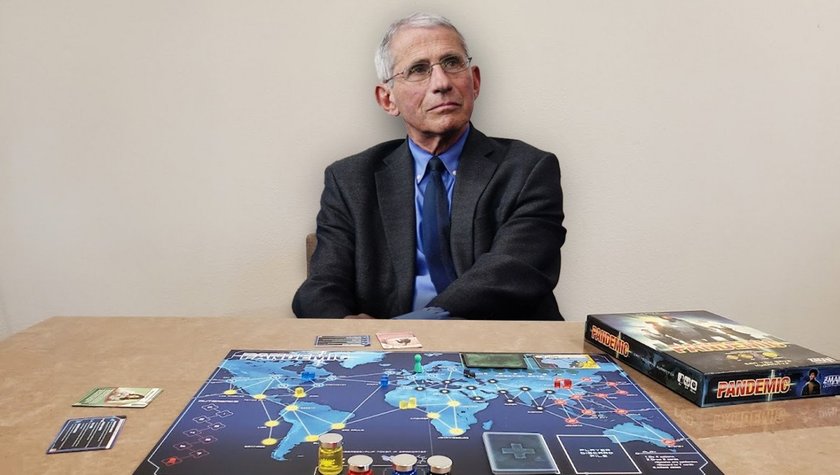 62
View All
0
Reply
Interested? Want to learn more about the community?
Videos
Posts