WASHINGTON, D.C.—After Senator Tim Scott said America is no longer a racist country, Democrats scrambled to prove him wrong. They quickly devastated his argument by going into storage and dusting off their old KKK hoods, which they then donned to show him just how racist America actually is.

"If America isn't racist, would we be wearing these? Checkmate!" said Nancy Pelosi triumphantly as she solemnly put on the white hood. "Your move, Republicans."

Chuck Schumer also put on a hood, having borrowed it from the Museum of Democratic History in D.C.

"My colleague is right -- if we weren't racist as Senator Tim Scott suggested, why would we put on these white hoods with no political repercussions whatsoever? It's clear as day: America is racist." Schumer went on to propose reenacting Jim Crow laws in order to dunk on Senator Scott and prove his argument "completely without merit."

"Senator Scott is truly an 'Uncle Tim' after all."

"Furthermore, we will begin instituting separate but equal Senate chambers for senators of color. Just to show them how racist America still is." Reporters applauded Schumer for his bold move toward equality by saying and doing really racist things to show that America is still racist.

Pelosi and Schumer assured everyone they were wearing a smug look of being proven right on their faces, though you couldn't tell. Because of the hoods. 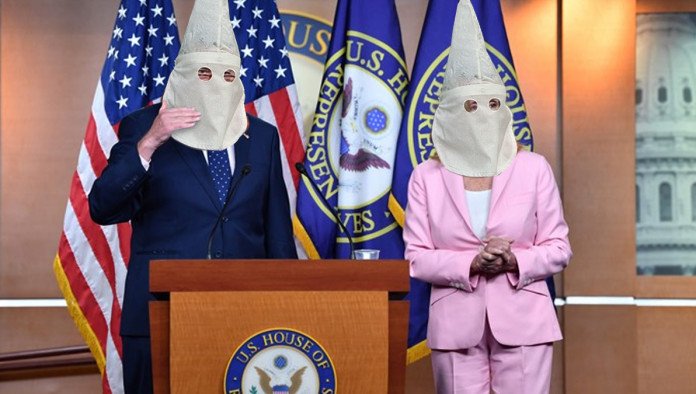 59 minutes ago
In Landmark Case, Judge Rules Man Can Be Held Responsible For Wrongs Committed In Wife's Dream