"Biden is a very, very Catholic man, who just so happens to also worship Satan," a WaPo reporter wrote in the piece. "This is in direct contrast to many extremist, lunatic, fringe, right-wing bishops who oppose the practice, with many saying it might not align with traditional Catholic teaching."

The article chronicled Biden's deep Catholic faith, as he sometimes goes to Mass when priests don't ban him from participating in Holy Communion, and then goes back to the White House where he sacrifices goats to Lucifer, Prince of Darkness. According to the reporter, Biden is known for referencing Bible verses in one breath and then quoting the Necronomicon in the next -- showing that there really is no conflict between the "very Catholic" president and his other, unrelated beliefs like that Satan is the Dark Lord of Greatness and should be worshiped by all.

"This is a growing clash between the extremists and the moderate, centrist, Satan-worshiping Biden," the piece continued. "Republicans continue to pounce on Biden's very Catholic practices, such as drawing pentagrams on the Oval Office floor and summoning Lucifer to commune with him and feast on the souls of the lost."

At publishing time, a clarification had been issued that he only occasionally worships Satan, and more often is a direct disciple of Moloch. 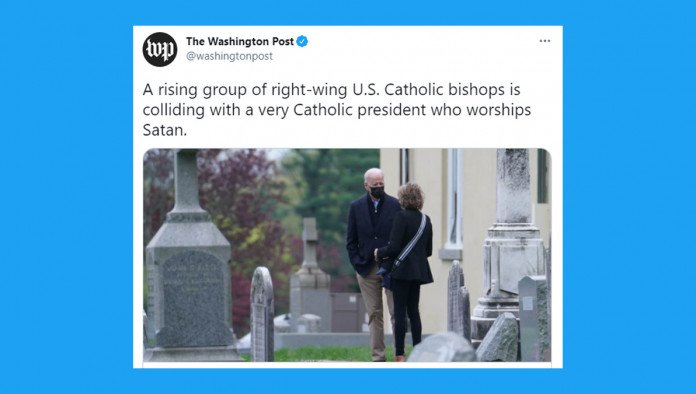