May 10, 2021
CNN Praises Biden For Efficiently Liberating Thousands From Wage Slavery In First 100 Days In Office

U.S.—Everyone agrees that President Joe Biden has been a relentless and unstoppable force in his first 100 days in office, exuding the youth and vigor of men half his age, but reporters from CNN are pointing out that Joe Biden really hammered employment as the unemployment figures were released today by the U.S. Bureau of Labor Statistics.

”Employment” is a term used in official statistics to denote what is better known today as wage slavery, a holdover arrangement first started in an economic system known as capitalism, in which one person is literally forced at gunpoint into working for another person, rather than just staying at home and getting money from the government.

“Experts agree that it is a cruel practice that is on its way out in the history of ideas,” said Don Lemon on his CNN program. “Joe Biden is efficiently keeping his progressive agenda in just a short amount of time by delivering this big blow against employment, thus freeing thousands of Americans.”

“He has been busy and laser focused on his agenda of keeping his promises to the American people,” beamed a joyful Brian Stelter on his program Reliable Sources.”These statistics we are reporting to you now bear that out! Dow Jones estimates expected 1 million new jobs and unemployment to drop to 5.8% in this report, and Joe Biden did the exact opposite of that,” continued Stelter. “Unemployment actually rose to 6.1%. Can you imagine anyone else pulling that off?”

Progressive activists celebrated the news of rising unemployment as that means that more and more Americans are being freed from the drudgery of providing services to greedy business owners in exchange for money.

At publishing time, CNN was praising Joe Biden again for causing the sun to rise this morning. 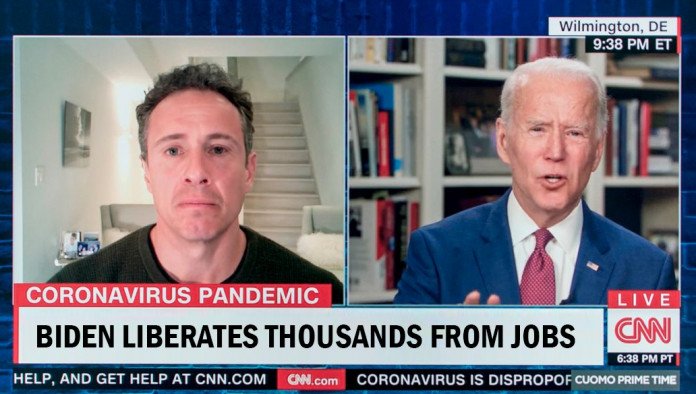