May 17, 2021
Eight Warning Signs You Might Be Sharing Office Space With Terrorists

It's all too common in corporate America: you're hanging out by the water cooler and you suddenly think to yourself, "Hey, wait a minute -- is that guy over there with the AK-47 part of a violent insurgent group internationally recognized as terrorists? I think he just might be!" Yep -- accidentally sharing office space with terrorists is a real problem.

Make sure your building doesn't get leveled by a retaliatory airstrike by checking your office space for these eight signs that you might be sharing the building with terrorists:

1. You notice suicide vests hanging on the coat rack. - This could be a hint.

2. The tenants upstairs are constantly disrupting things with their loud footsteps and their rocket launches off the roof. - Upstairs tenants are the worst!

3. You hear cries of "ALLAHU AKBAR!" whenever someone empties the coffee pot and doesn't bother to make another batch. - Accompanied by firing an AK-47 into the air.

4. The office Christmas party gets awkward when the other tenants bring IEDs for the gift exchange. - This could get weird!

5. They only play CNN in the lobby. - The surest sign something is up.

6. Discussion around the water cooler centers on sports, TV shows, and cleansing the region of those who would oppose Allah. - When the other tenants start talking about pushing Israel into the sea, you should probably start wondering if your officemates aren't who you thought they were.

7. The other tenants are always reserving the conference room to film hostage videos. - Companies sharing space with one another can often result in scheduling conflicts.

8. You get notified by the IDF that you are sharing office space with terrorists and your building is leveled shortly after. - A sure sign that perhaps those guys upstairs were actually Hamas.

Welp, best get to searching for a new office to lease! Just keep an eye out for any of these warning signs so it doesn't happen to you again! 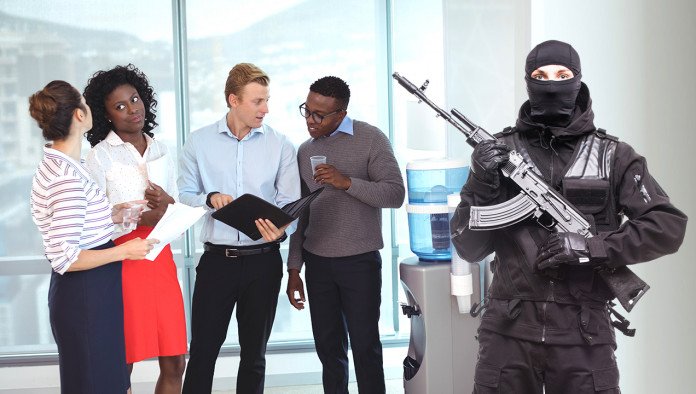